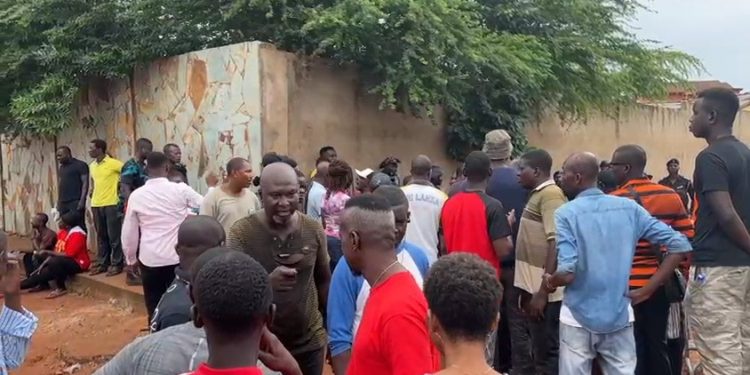 There was confusion at the venue of the governing New Patriotic Party’s constituency elections in the Okaikoi South NPP Constituency on Thursday morning, as some members massed up to prevent the polls from taking off.

According to them, more than 400 names have been removed from the Okaikoi South NPP Constituency album.

Speaking to Citi News, the 1st Vice Chairman of the NPP in the Okaikoi South Constituency, William Sangmor, said the process has not been free and fair.

“Those that we know to be the delegates for the election this morning have all been changed. Over 400 people have had their names taken off the album and their pictures changed.

We only received the album yesterday [Wednesday] after finishing it long ago, informing us that the election is this morning. So the people here are trying to prevent the election from taking place, ensuring that the right thing is done.”

The election is supposed to start at 7:00 am, but as the situation is, the setup is done, but the people are not happy, so they are not going to vote. It is very unfair.”

Meanwhile, the police have managed to control the crowd and voting is underway.

“As the agitations are rising, we have to make sure there is calm, so we will be here till the election is over to provide security to the people. We have however made some arrests and will take them through the due process of the law.”

SIDICOIN: “I am not an ambassador” – Stonebwoy reacts to BoG warning

Suspend the National Cathedral project for an audit to be done into its accounts – Duncan Williams, Eastwood Anaba.

Court dismisses Ato Essien’s application for a stay of proceedings

Two fake police officers were arrested during the NPP primaries

We use cookies on our website to give you the most relevant experience by remembering your preferences and repeat visits. By clicking “Accept”, you consent to the use of ALL the cookies.
Do not sell my personal information.
Cookie SettingsAccept
Manage consent